"Destroyer of Thousands": The Mace as Weapon and Symbol of Power 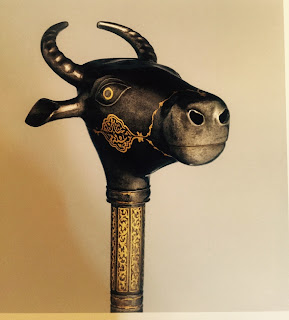 The mace as a war weapon evolved from primitive clubs, when the addition of stone spikes added to its effectiveness. Stone maces often shattered, however, limiting their value as weapons. With the development of copper or bronze heads, the mace became a powerful weapon of war, as well as a symbol of authority and justice. An important weapon throughout the world, the mace assumed special importance in the Middle East and East Asia.

Among the most famous of mythic maces is Sharur, "Destroyer of Thousands". Sharur was an enchanted mace which could both fly and speak. The symbol and weapon of the Akkadian god Ninurta, this object served as a communication device, spy drone, and in some versions, could transform into a flying lion!

Although not used extensively by Roman fighters, ancient Persian knights favored maces as weapons of war. At short range, a mace could be as deadly as a sword or battle ax. The Gorz was a mace with a head shaped like an ox, and plays a major role in Ferdowsi's The Shahnameh, including its use to defeat the dragon-demon Zahhak. It continues to have important symbolism in the Zoroastrian faith. A symbol of justice and heroism, it was considered a decisive weapon of war. The use of maces with animal or even human faces dates back to the Bronze Age in Iran.

For more pictures and links to amazing weapons from the Middle East, visit my Pinterest Board.
Posted by M.A. Williams at 6:36 PM