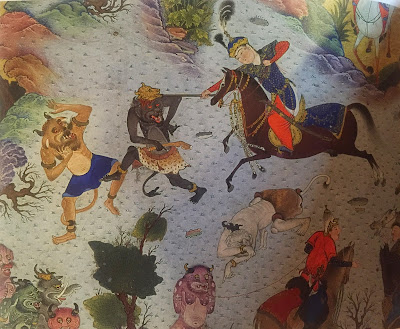 Demons in the Persian tradition go by many names, such as Div and Daeva, and are a class of supernatural creatures associated with wickedness and deceit. In some texts, the land of the Div is known as Mazandaran, not to be confused the present-day province in contemporary Iran. 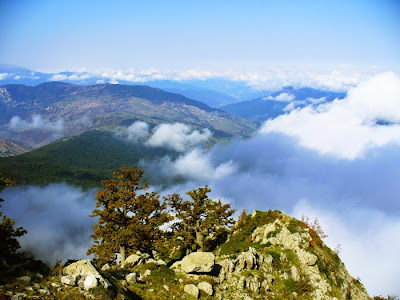 Being the devilish creatures that they are, the Div are known for doing the opposite of what's asked of them. They sleep during the day, and can change into dragons or even onagers (even though a venom-spitting giant serpent might be more of an impressive shape than a wild ass). Although they often try to trap people with magic, the Div may sometimes agree to serve humans as supernatural servants, usually after losing a battle.

The original term Daeva comes from Zoroastrian scripture, and early references describe the Div as false or lesser gods. Later references describe beings similar to the Western Christian view of devils, as sources of evil and destruction. Certain Div were associated with negative human attributes such as Eshm (wrath) and Varun (unnatural lust).

The Persian epic The Shahnama contains multiple stories of great battles between human heroes and ferocious Div, such as this confrontation with the White Demon, also known as the Div-e-Sepid, pictured below. 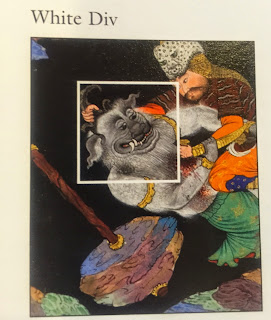 Although devils in the Western tradition are almost always associated with the color black and darkness, some of the demons in The Shahmaneh are linked instead to the color white. The Div were said to be born with light hair, a superstition that caused Sam, one of the main characters of The Shahmana, to reject his albino son Zal.  Despite the pleas of Zal's birth mother, Sam sent his white-haired child away to be left to die on a mountaintop. Fortunately for Zal, his lack of melanin wasn't an issue for his adoptive mother the Simurgh, a giant bird who raised the future hero in a huge nest on Mount Damavand, the highest peak in Iran (and the highest volcano in Asia). 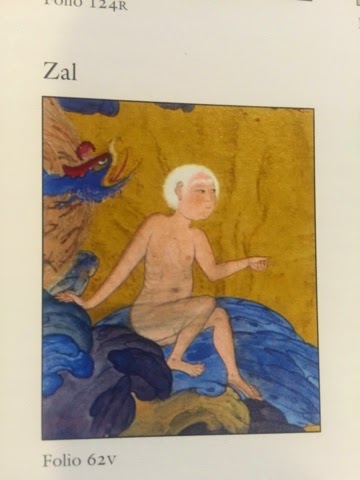 The Persian and Arabic equivalent to the Western Satan is Iblis. In some sources, he's described a Jinn who rebels against God and refuses to bow to Adam. Here he appears in a Persian painting: 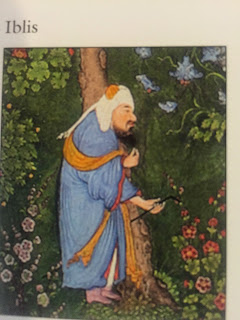 On a lighter note, here's a fairy-tale type rendition of a young hero facing down a giant Div as a design on a stamp from Azerbaijan. 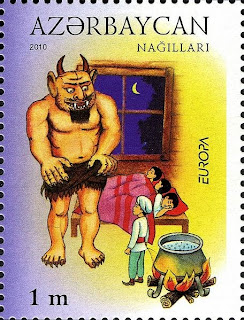 Check out more fantastic photos in the stunning The Shahnama of Shah Tahmasp: The Persian Book of Kings, by Sheila Canby.
Posted by M.A. Williams at 8:58 PM