Review of "Hearts Before Diamonds" by Bryan Fields 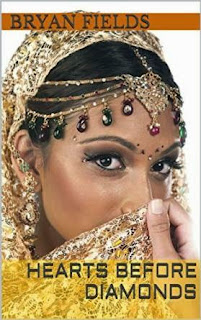 A rollicking tale of adventure and love set in an alternate steampunk Asia, "Hearts Before Diamonds" is a short story revolving around Edward Wallace, an American expat in India who works as a 'problem solver' for a fee. When Timir, a new client hoping to thwart the arranged marriage of his beloved arrives, Wallace sets out to use his unique talents to see that true love wins out in the end.

Only a few teasing glimpses of the complex story world Fields has created are revealed in the plot, which proceeds with a galloping pace and plenty of action. America has an emperor, flying tigers terrorize the populace, and Diamond Princes who sell the gems from the fabled mines of King Solomon have to deal with dwarves who mine the precious stones.

References to Hindu deities, as well as Muslim concepts of the Jinn, are utilized in the story. Surprise twists are sprinkled throughout, and in a refreshing change, both class issues and sexual orientation are brought into the story world. None of this gets in the way of a great adventure, however.

"Hearts Before Diamonds" does a great job incorporating the diversity of Indian culture with a steampunk flair. Some mature themes are touched upon, but the story would appeal to older teens, and readers of any age interested in non-Western settings for Fantasy.
Posted by M.A. Williams at 8:50 PM