Desert Animals Part 1: What Does the Fox Say?

Below is a picture of a Fennec fox, the smallest of the fox family and a common predator found in the Northern Sahara.  This animal was captured by local children and is being shown off to tourists for tips.  The children lure the animals with dried fish and pieces of meat, then keep them on leashes and hold them like lap dogs. 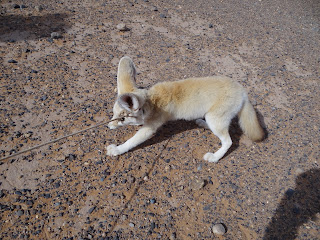 In the desert camps, our guide explained that wild Fennecs will sometimes come into the tents when it was quiet and accept a few scraps of food before slinking away, much like feral cats.

Fennecs are small nocturnal members of the canid family known for their ability to survive in high heat, scarce water environments.  Large birds of prey can attack them, but they are also hunted by humans for their fur, and increasingly, the exotic pet trade.  Their large ears are used to locate their prey: insects, rodents and rabbits.