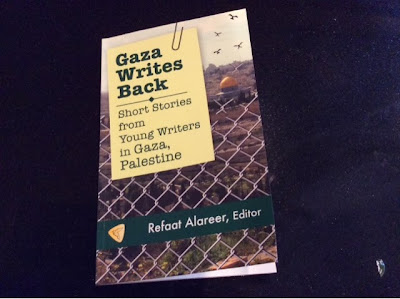 Need to feel inspired about writing?  Order a copy of Gaza Writes Back, a collection of short stories written by young writers in Gaza.  The collection features fiction written by young people who have lived through the current blockade and flares of violence, including the focus of the collection: the 2009 military excursion known as Operation Cast Lead.  Remarkably, all but two of the stories were written in English, a second language for the authors.  In addition, the collection is heavily weighted towards female writers: 12 out of 15 stories are by women.
The stories take on issues the writers face in their own lives, including the violent death of family members and the on-going trauma of life in a combat zone.  In "Will I Ever Get Out", Nour Al-Sousi writes of a young student forced by economic hardship to work in the dangerous Rafah tunnels.  The impact of the killed and wounded on Gaza's medical system is a focus of several stories, including the haunting "Neverland" by Tasnim Hamouda and "Please Shoot to Kill" by Jehan Alfarra.  In "A Wish for Insomnia", Nour Al Borno choses the point of view of the wife of an Israeli soldier to describe wartime atrocities.
Photographs and biographies of the contributors are included in the collection, providing an engaging look at the authors.  Gaza Writes Back provides a perspective often missing in American discourse on the Israeli-Palestinian conflict, and showcases the imagination and creativity of young Palestinian writers.  The collection is edited by Refaat Alareer, and is available through Just World Books.
Posted by M.A. Williams at 5:34 PM